Mozambique’s first inhabitants were Bushmen hunter-and-gatherers. Between the first and fourth centuries a.d., waves of Bantu-speaking peoples migrated from the north through the Zambezi River valley, and from the sixth century a.d. onward Arab and Asian traders worked along the southern coast of Mozambique. They traded gold brought from powerful civilizations inland and raided the north for slaves and ivory.

When the Portuguese explorer Vasco da Gama reached Mozambique in 1498, Arab-trading settlements had existed along the coast and outlying islands for several centuries. The Portuguese set up trading posts, which became regular ports of call on the new route to the East. By the 1760s, slavery was the most profitable trade. Over a million slaves were sold to North America and to the sugar plantations in Brazil and Cuba.

Portuguese influence gradually expanded, and individual settlers were granted extensive autonomy. As a result, investment lagged while Lisbon devoted itself to the more lucrative trade with India and the Far East and to the colonization of Brazil. At the Berlin Conference of 1884, Mozambique became a Portuguese colony. Land was rented to British and French companies, which set up plantations to grow cash crops such as cotton and tea. The colonial rulers raised income through heavy taxes and a brutal forced-labor system.

The drive for Mozambican independence developed, and in 1962 several anticolonial political groups formed the Front for the Liberation of Mozambique (Frelimo), which in September 1964 initiated an armed campaign against Portuguese colonial rule. After ten years of sporadic warfare and major political changes in Portugal, Mozambique became independent on 25 June 1975. By that time, the country was in ruins. Over 90 percent of Portuguese settlers had left, taking everything they could. Of the country’s five hundred doctors, only eighty remained.

The frelimo party that came to power quickly set about re-building health and education services, but it had little experience, and even fewer resources. The leaders of the frelimo military campaign established a oneparty state allied to the Soviet bloc and outlawed rival political activity. frelimo eliminated political pluralism, religious educational institutions, and the role of traditional authorities.

The new government gave shelter and support to the South African anc and Zimbabwean zanu liberation movements while the governments of Rhodesia and South Africa fostered and financed an armed rebel movement in central Mozambique called the Mozambican National Resistance (renamo). In the rural areas, people coined the phrase, “frelimo by day, renamo by night” since the government blamed all lawless behavior on renamo. Civil war, sabotage from neighboring states, and economic collapse characterized the first decade of Mozambican independence. The result was devastating. Many thousands of civilians were injured or killed and schools, health centers, railways, and roads Hippo remain in numbers in many waterways of Mozambique. were destroyed.

In the third frelimo party congress in 1983, President Samora Machel conceded the failure of socialism and the need for major political and economic reforms. He died, along with several advisers, in a 1986 plane crash. His successor, Joaquim Chissano, continued the reforms and began peace talks with renamo The new constitution enacted in 1990 provided for a multiparty political system, market-based economy, and free elections.

In the 1980s and early 1990s droughts and the disruption caused by the full-blown civil war between renamo and frelimo led to severe food shortages and famine for millions. Eventually, with the country brought to its knees, the civil war ended in October 1992 with the Rome General Peace Accords. Under supervision of the onumoz peacekeeping force of the United Nations, peace returned to Mozambique. To add further misery to the people, in 2000 and 2002 Mozambique was hit by devastating floods that destroyed the homes and livelihoods of hundreds of thousands of people.

Today Mozambique has taken a unique path to repair the damage caused by years of civil war and white flight. In the 17 November 2005 edition of The Wall Street Journal, Filimone Meigos, a prominent sociologist at the Mozambique Institute of Technology and Science in Maputo, is quoted as saying, ”A problem for Zimbabwe has become a solution for Mozambique.” He is referring to the policy of the government to entice white farmers to settle in Mozambique by offering them “cheap land, plentiful labor, and tax breaks.” Many white Zimbabwean farmers, pushed off their land by President Robert Mugabe’s firestorm of expropriation, have relocated to neighboring Mozambique where they are treated as valuable development resources.

Already the prospects for the future of both white and black Mozambicans is bright. Officials in the government say that white farmers from Zimbabwe and South Africa have made a difference. “According to government statistics, their 35 new farms in the Manica province have created 10,000 new jobs on about 54,000 acres of previously unused land. The farms have introduced modern exportgeared agriculture to the nation, churning out products such as flowers, tobacco, and yogurt. ‘We never had fresh milk here before them,’ says Cremildo Rungo, a Manica agriculture official who has worked with white farmers since the influx began in 2002. ‘Our people used to go to Zimbabwe to buy food. Now it’s the Zimbabweans who come to buy food here.’” (“Racial Reversal: To Boost Economy Some Af ricans Woo White Farmers” by Yaroslav Trofimov). 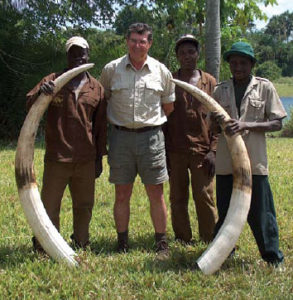 Mozambique was once a highly regarded safari destination, made famous by the likes of Harry Manners, Werner von Alvensleben, and Wally Johnson to mention but a few. At one stage Mozambique Safarilandia was thought to be the largest safari operation in Africa. Other companies like Safrique also made their mark prior to the 1970s. When the Mozambique civil war began in 1972, the hunting industry was brought to a grinding halt. Mozambique’s war of independence, one of the bloodiest civil wars in Africa, lasted until the early 1990s.

With the cessation of hostilities, Mozambique suddenly was buzzing with concessions being opened up, and outfitters once again began marketing hunting in the count ry. Many of the formerly famous areas like the Save had had virtually all its wildlife wiped out during the war.

Many good pockets remained, however, especially the concessions bordering Kruger Park. In addition, community areas bordering Lake Cabora Bassa, the Zambezi Delta, and the Niassa Reserve toward the Tanzanian border still had good game populations. Clients were nervous, however, about mined roads and rebels since both were still in the news.

Slowly things returned too normal. The United Nations began to clear the land mines, and the new government started to rebuild the shattered country. After a few brave souls had hunted in Mozambique, the success stories started to filter home to the international hunting community. Today Mozambique is no longer the stepchild of African hunting. Many good hunting concessions have proved their worth, and reputable safari companies now have bookings for at least two years in advance. Moreover, the Mozambican people are friendly and see hunting in a positive light. Most of the rural communities rely on the meat provided by the safari operators during the hunting season. All in all, Mozambique has turned the corner and seems to be on the road to becoming one of the great African safari destinations again. 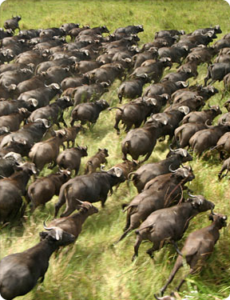 Areas and Animals to Hunt

In the far north there are five hunting areas: Coutadas A, B, C, D, and E. The terrain is generally level or gently undulating and scattered with inselbergs (island mountains). Miombo woodland is the most extensive type of vegetation found in the northern savanna biome. In central Mozambique there are three hunting areas: Marromeu in the southern Zambezi Delta, Lake Cabora Bassa on the Zambezi River, and between the Zambezi River and Gorongoza National Park.

Mozambique is blessed with an extremely wide variety of habitat and game species. The Zambezi Delta of central Mozambique once boasted one of the highest concentrations of game in the world, and the community areas around Lake Cabora Bassa have also yielded excellent trophies. Currently there are 25 game species on quota, ranging in size from Suni to Elephant. As a member of cites Mozambique has a cites quota for both elephant and leopard, which are classified as cites 1. There are currently 40 elephant on quota for Mozambique, and many exceptional trophies have been taken, including a few making the magical 100-pound mark. Most of these big elephant have been taken in the northern regions of Niassa.

Unfortunately, because the U.S. Fish and Wildlife Service still does not recognize the elephant quota, it currently will not allow the import of Mozambican elephant trophies; however, it does allow leopard imports into the country. Buffalo and waterbuck were hunted heavily during the war, but they have made a comeback, and large herds of buffalo are once again common.

The war years took their toll on the Zambezi Delta, but, fortunately, because of the remoteness of the area it was largely spared. Fifteen years after the war, the game has come back well and is flourishing. The three distinct ecosystems surrounding the delta provide habitat for a wide range of animals. The sand forests have excellent populations of red and blue duiker, leopard, and Livingstone suni. The fringes are home to Chobe Bushbuck, Nyala, Hyena, and Bushpig, while the tropical savanna has herds of Sable, Livingstone Eland, Cape Buffalo, Zebra, Lichtenstein Hartebeest, and Oribi. The flood plains during the drier months of the hunting season have hundreds of Waterbuck, Warthog, and Common Reedbuck. The swamps are home to Elephant, Hippo, Crocodile, and some of Africa’s largest herds of Cape Buffalo. The Zambezi Delta is still one of the few places in Africa where one can do a full-bag.

We use cookies on our website to give you the most relevant experience by remembering your preferences and repeat visits. By clicking “Accept All”, you consent to the use of ALL the cookies. However, you may visit "Cookie Settings" to provide a controlled consent.
Cookie SettingsAccept All
Manage consent

This website uses cookies to improve your experience while you navigate through the website. Out of these, the cookies that are categorized as necessary are stored on your browser as they are essential for the working of basic functionalities of the website. We also use third-party cookies that help us analyze and understand how you use this website. These cookies will be stored in your browser only with your consent. You also have the option to opt-out of these cookies. But opting out of some of these cookies may affect your browsing experience.
Necessary Always Enabled
Necessary cookies are absolutely essential for the website to function properly. These cookies ensure basic functionalities and security features of the website, anonymously.
Functional
Functional cookies help to perform certain functionalities like sharing the content of the website on social media platforms, collect feedbacks, and other third-party features.
Performance
Performance cookies are used to understand and analyze the key performance indexes of the website which helps in delivering a better user experience for the visitors.
Analytics
Analytical cookies are used to understand how visitors interact with the website. These cookies help provide information on metrics the number of visitors, bounce rate, traffic source, etc.
Advertisement
Advertisement cookies are used to provide visitors with relevant ads and marketing campaigns. These cookies track visitors across websites and collect information to provide customized ads.
Others
Other uncategorized cookies are those that are being analyzed and have not been classified into a category as yet.
SAVE & ACCEPT